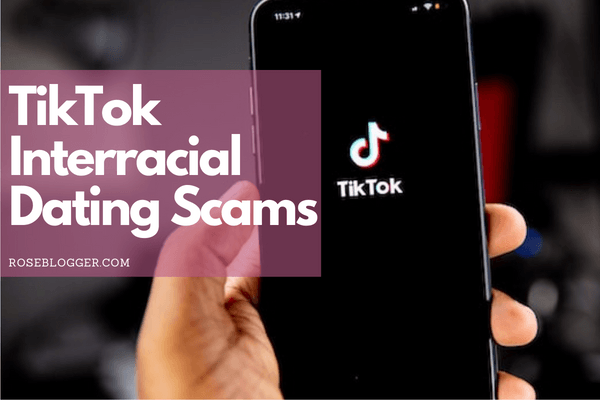 There are many kinds of scams on the platform but today we are focusing on TikTok Interracial dating scams. The most common scam is the one where the scammers steal white people’s pictures, then make a slideshow with the pictures, and use text popups to say that they are ready to get married to an African man/woman.

I have tried very much to caution our African singles not to leave comments on those kinds of videos because by doing so, you are making yourself a target. What happens is, the scammers don’t respond to the comments but instead fish out the people who have commented and reach out to them privately and that’s, how the scamming starts.

It starts like a normal online relationship, and then somewhere down the road, they will either claim that they have sent you a package with lots of expensive gifts, but you will need to send some money to cover the customs fees or clearance fee.

The Interracial dating matchmakers on TikTok, last weekend on my live stream on Tiktok, I hosted a lady who paid a matchmaker on TikTok to connect her with a white man. When she paid the initial agreed amount, she was sent a link, turns out the link was to a chatroom type of app. She tried to chat with some people there but she was hit with demands to take her clothes off, some making fun of her appearance, and she told me that she left that app on the verge of tears.

When she went complaining to the so-called “matchmaker” she was told to pay some more money so she can be added to the super-premium group, where someone will be assigned to her case to filter the scammers and the jokers and just present her only with serious candidates. When she refused to pay and demanded a refund, she was blocked but not before being insulted and even told that she is not the kind of woman that a white man would go for.

I find it funny when I see young African women leaving comments on videos where an old white man would say that he is looking for a young African woman to spoil, and then they say to reach out on Snapchat or Instagram if you are interested. This kind of scam works just like the previous one, they pull you from TikTok and take you to another platform where you can exchange videos and photos, so they will either try to say they have sent you expensive gifts, if you refuse to send the money, then they will start blackmailing you.

See with the Sugar Daddie scam, they will make you send nude pictures because they tell you that they are not willing to send you $5k a week without first seeing what you are working with. So they will not only demand pictures but videos too.

This is where the so-called interracial matchmakers go live on TikTok and demand TikTok gifts in exchange for a Muzungu (white man) There is a lady who shared with me that she was told to send two lions so she can be connected to a white man. For those who are not familiar with TikTok and the TikTok gifts, a lion is one of the biggest gifts that you can send someone and it will cost you $400 USD To purchase.

The biggest is what is known as the TikTok Universe this gift will cost you $500 US, and although after TikTok takes their cut, the creator will receive roughly half of that, it’s still a lot of money, especially to the giver of the gift. After sending the gifts, what these so-called matchmakers will do is ask for your pictures and your requirements when it comes to the kind of man you are looking for.

Then guess what they do next, with some of the money you send they join a dating app, create a profile using your pictures, and upgrade their profile then they just start contacting random white people and send you their contacts, remember they cannot verify if these random white men are real because obviously, they cannot get on a video call, since they are not who they claim to be.

In other words, you are paying them to get on dating apps and scam people. I keep telling people instead of paying someone to connect them with a white man, why don’t you join a dating app and pay for it? That way you can get access to more features and your profile will be recommended to more users. In my opinion, paying someone to get on a dating site and search for a white man on your behalf is just foolish.

As I mentioned at the beginning of the post, there are many scams these days on Tiktok, but TikTok interracial dating scams are spreading like wildfire, anyone who is dating a white man is apparently an expert in interracial relationships and they are also a matchmaker, it’s like dating a white man gives one special power.

I actually heard one lady saying that she can either connect you with a regular guy ( meaning a black man) or she can connect you to a Muzungu (a white man) and I was thinking so does that mean if you connect me to a white man you are connecting me with a superhuman? Like a black man is just a normal human but a white man is the premium version of a human? This doesn’t make sense to me at all.

Anyway, I will stop there, for now, please be careful of these scams, if you want to do online dating, just join the apps yourself.